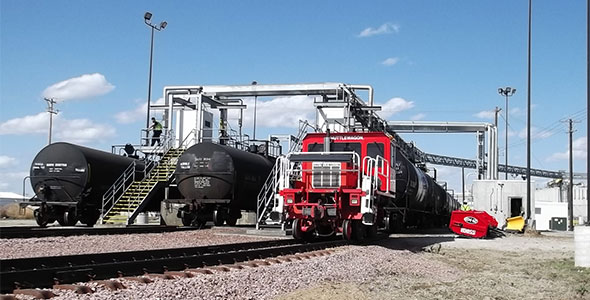 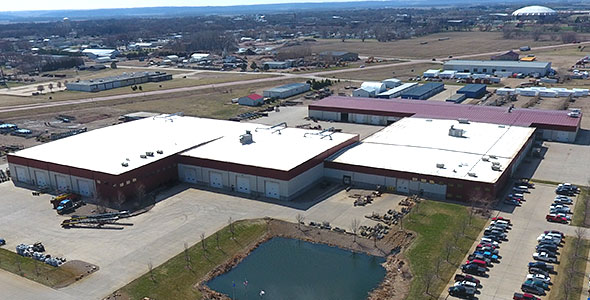 Masaba originally chose to work on a Design/Build basis with Nelson Industrial Construction and Engineering because of their experience, expertise, reputation for building quality projects and their ability to listen to the customer and what he wanted. MASABA moved from a 20,000 Sq Ft metal building to a Nelson custom designed and built 100,000 Sq Ft structure in 2005. Two years later MASABA needed to expand their operation and called Nelson to design and complete a 60,000 Sq Ft expansion in 2008. Within a few years, yet another expansion (51,000 Sq Ft) was designed and added to the existing structure to give MASABA over 210,000 Sq Ft of manufacturing excellence. Quality keeps customers coming back to Nelson Industrial Construction & Engineering time after time. 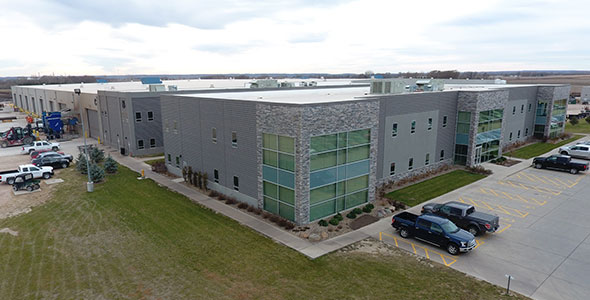 Sabre Towers and Poles division of Sabre Industries is a manufacturer of large steel utility poles and towers.  Sabre secured a large contract to provide the poles for a major cross-country transmission line without the manufacturing capacity to produce it.

Nelson Industrial Construction & Engineering was engaged to design/build a facility on a fast track basis to supply the manufacturing capacity for Sabre’s needs.  The project required a campus consisting of seven buildings totaling nearly 400,000 SF including manufacturing and office space. Nelson immediately mobilized and had the manufacturing plant portion of the project designed, built and in operation within six months of the contract being awarded.

The project includes a manufacturing building of 192,000 sf plus accessory buildings for steel preparation, sandblasting, painting, maintenance and storage.  A production office and a freestanding administration office building completed the project.  The entire project was designed and built within a year of contract award. 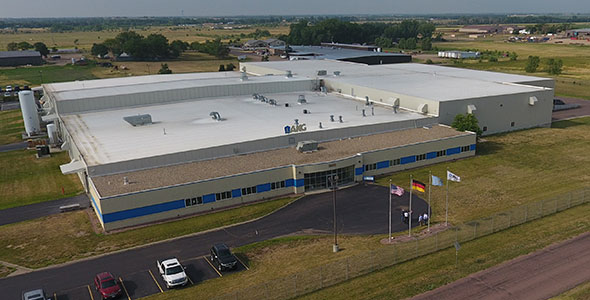 AKG is a worldwide company headquartered in Hofgeismar, Germany. AKG manufactures aluminum heat exchangers for heavy equipment manufacturers throughout the world. Nelson Industrial Construction & Engineering was selected to Design/Build their Midwest Facility located in Mitchell, South Dakota. When their business grew, they again contacted Nelson to build an addition to their facility. The original structure consisted of 93,000 Sq Ft with 87,000 Sq Ft utilized for manufacturing and 6,000 Sq Ft was used for an office area. The expansion that was built a few years later was 60,000 Sq Ft of which 45,000 Sq Ft was additional manufacturing space and 15,000 Sq Ft was used for storage. 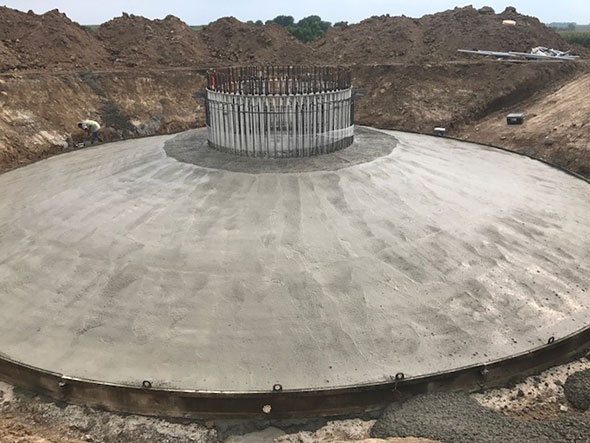 Nelson Industrial Construction & Engineering has installed foundations for over 3,000 utility sized wind turbines all over North America.  In the U.S. we have built foundations in California, Pennsylvania, Texas, Oklahoma, Missouri, New Mexico, Iowa, Nebraska, Colorado, Wyoming, North Dakota and Kansas. In Canada we have built foundations in Alberta, Ontario and Saskatchewan. Our typical scope of work is to excavate the hole, furnish and install the reinforcing steel, anchor bolts, concrete, and then cover it back up.  While others set the lower tower section we grout the base and tension the anchor bolts. 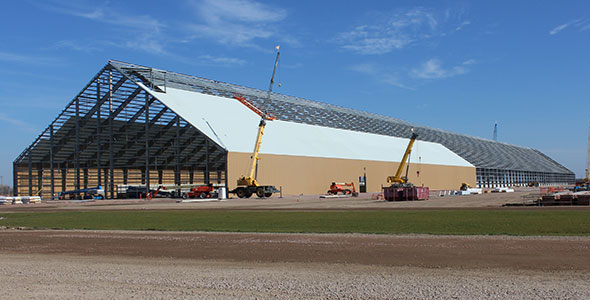 CF Industries broke ground in the fall of 2013 on a Two Billion Dollar fertilizer plant just south of Sioux City, IA. At the time, it was the largest single private capital investment in Iowa. Nelson Industrial Construction & Engineering was invited to be a part of this mega expansion and contracted to build, what would become, the largest clear span building in Sioux City measuring 1,800 Ft long, 210 Ft wide and 105 Ft high. The building is a warehouse for the 3,850 tons of urea granulation product that’s produced daily.

Frito Lay had a need to develop distribution centers nationwide to accommodate their retail customers with prompt delivery of fresh product for their shelves. Nelson Industrial Construction & Engineering was engaged to provide one such distribution warehouse. Frito Lay was so pleased with the quality of the structure and the value received that they have continuously used Nelson to design and build several of their distribution warehouses. We currently have built 20 distribution warehouses in 11 states and have several more on the drawing board for future expansion. 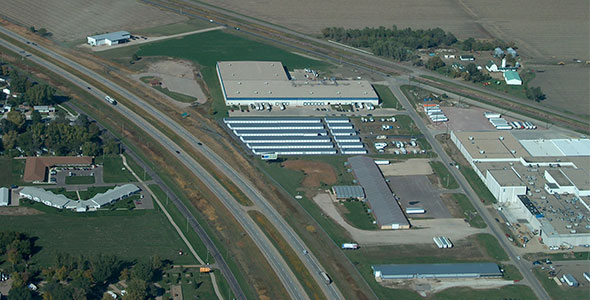 Gateway Computers grew from a startup company to a major computer manufacturing company employing nearly five thousand people within a very few years. Nelson Industrial Construction & Engineering developed, designed and built two warehouses to provide services to Gateway.  The first was a 75,000 SF structure to provide support for suppliers to Gateway and the second a 185,000 SF warehouse to store materials for “just in time” delivery to the manufacturing plant.

When the computer business moved to offshore assembly Nelson converted these warehouses to other uses.  The larger one was developed for food processing uses and is presently occupied by Red’s All Natural and Royal Canin Pet Food.  The smaller warehouse was converted to “office/warehouse” suites and is occupied by computer related companies and by Frito-Lay. 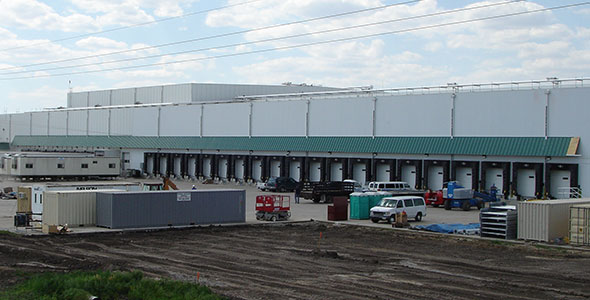 Nelson Industrial Construction & Engineering designed and built a freezer warehouse which included blast freezers and order picking and shipping equipment to service the Farmland Foods Crete, Nebraska plant for Harker Cold Storage. Later, Farmland purchased the plant and engaged Nelson to Design/Build a large expansion to the facility to store and distribute products of the Crete facility to customers further west. The 200,000 Sq Ft plant features blast freezing, storage and large shipping docks capable of loading and unloading trucks without exposing the contents to the exterior elements. 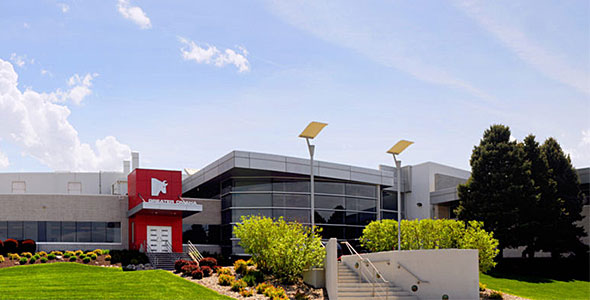 Nelson Industrial Construction & Engineering designed and built a carcass cooler for Greater Omaha Pack.  We also designed and built a reinforced concrete storm water retention tank because the plant is located on a restricted lot in the city of Omaha.  During the course of construction of the storm water retention tank, the owner saw that this would be a good spot for a parking lot so the top of the tank was designed as a parking lot providing usable space for what was once an unsightly ditch. 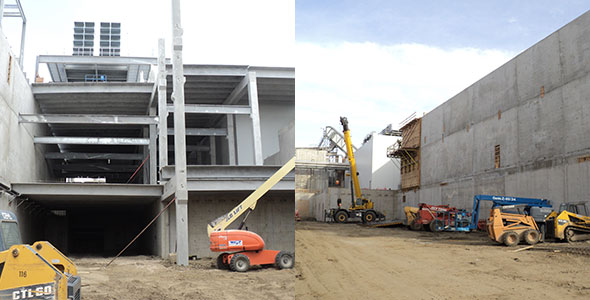 Tyson Food’s flagship plant at Dakota City was aging; present demands on the original harvest floor greatly exceeded the original design capacity and the structure and equipment were aging.   The plant had to be kept in operation at all times so the decision was made to build an entirely new harvest floor with state of the art design.  Tyson decided to increase the total capacity of the Dakota City plant to incorporate the capacity of an aging sister plant that had reached the end of its viable life.

The only location for this structure was a long narrow congested site used for rail loadout and surrounded by buildings and the cattle yards. Tyson selected Nelson Industrial Construction & Engineering do the project on fast track design/build basis. Food safety is of the highest concern so the structure was designed of poured in place and precast concrete to avoid cavity wall construction of any type. Daily design modifications and changes in the work scope occurred as the project evolved.  Tyson and Nelson engineers worked together continuously on an evolving design while the structure was being built.

The end result will be the largest cattle processing plant in the world with a capacity of 7,200 head per day of the very large cattle produced by modern cattle producers.

Nelson Industrial Construction & Engineering was awarded the “Contractor of the Year” title by Tyson for their efforts on this project. 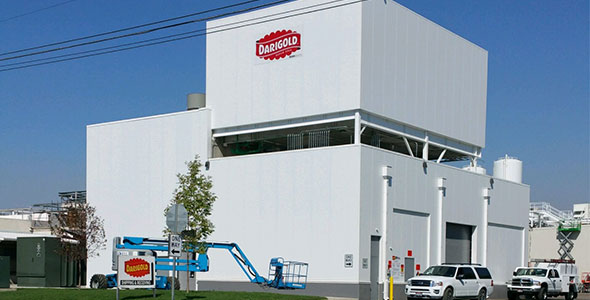 Darigold in Boise, Idaho needed to upgrade and change their refrigeration system from ammonia to glycol. Nelson Industrial Construction & Engineering worked with McNeil Industrial Refrigeration, who designed the system, to build the structure that housed the all of the new equipment for the switch. The real challenge of this project was that it had to be done without the plant shutting down for an extended period of time. Even though there was a total of two weeks scheduled for the transition to take place, Nelson and McNeil were able to accomplish the task in one 12-hour period. Suffice it to say, the client was very pleased with the project’s outcome. 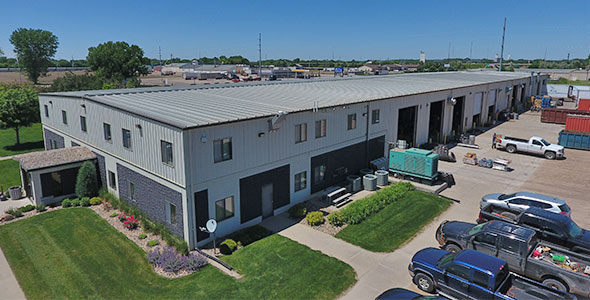 Having out grown their existing facility K&B looked to Nelson Industrial Construction & Engineering to design and build their new facility. It needed to accommodate truck repair and maintenance, offices adequate for existing staff and be expandable for future growth. Nelson designed a structure to meet all that criteria. However, the real challenge was that it needed to be built over the winter months in Nebraska. With all the obstacles of a cold, snowy winter, Nelson was able to overcome the elements and present a completed project to K&B the following spring. Since then K&B has quadrupled their business and continues to grow successfully. 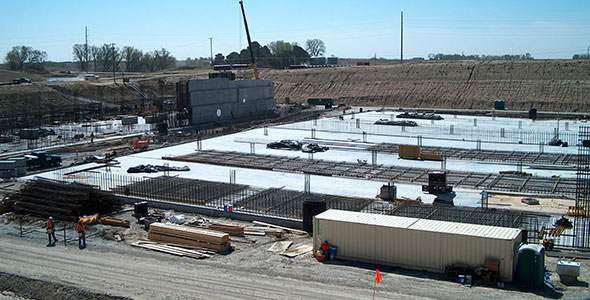 The City of Omaha needed additional water for the western portion of Omaha and decided to build a large new water plant and well field to serve the rapidly growing western part of the City. They selected Alberici Contractors of St Louis to be the Project Managers of the project.  Alberici selected Nelson Industrial Construction & Engineering to build the detention tank portion of this project.

Nelson Industrial Construction & Engineering has been in business since 1985. As a company we have expanded each year to better service our clients and the market. We have worked on projects throughout the United States.